Discovering Missing or Elusive Ancestors and Siblings with new Indexes

How do I identify missing siblings?


I am sure that by now most of you will be aware of the new indexes made available just over a week ago by HM Passport Office aka General Register Office for England and Wales.
These now contain important additions.


This addition will make it easier to find the correct birth and death for those years. I say easier for reasons I shall explain later.

There are no marriages in these new indexes and the Births and Deaths only cover a limited time span.

At the same time as launching the new indexes it was announced that a PDF pilot would start on 9th November 2016. 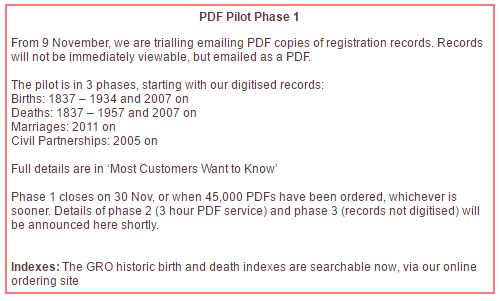 I like many others have used this as an opportunity to look for members of family who may not have shown up on the census or have remained elusive.

Family legend from a now deceased aunt was that there had been a child who had died. I was uncertain as to whether this was a sibling of my father or paternal grandfather. Looking at the indexes and the years of birth it was more likely to be a missing great aunt or uncle but my great grandfather had several brothers.
However given the new information this is what I found.

I have ordered a copy using the new pdf service and assuming the details match I have also found a likely death in the same quarter of a child without first names recorded.

I have also ordered 3 more birth certificates with different reasons.
One of my 2xgt grandmother's was christened in 1845 in Lyndhurst, Hampshire. This is in the New Forest registration district and I have not been able to find a birth registration for anyone with her first name. 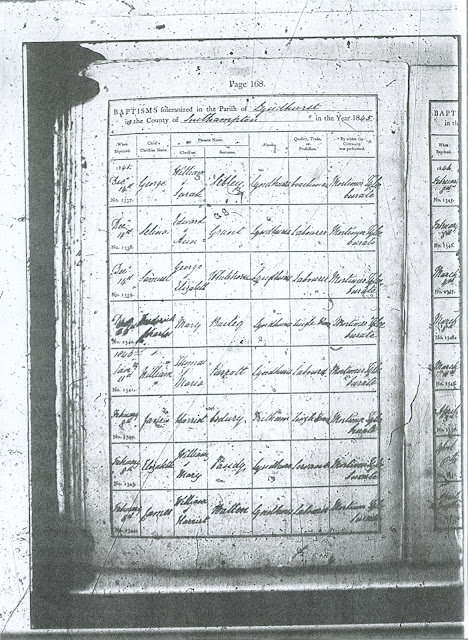 The above is a copy of the christening record and she is recorded on the census records as Selina.
Below is the only entry for that same year with the maiden name of her mother. All the other children with this mother's maiden name are her siblings, including another registered as Alice Mary, I am now almost certain I have the correct registration but am awaiting the documentary proof.

The other 2 birth certificates were for children missing from the census that had been highlighted by the 1911 census. (If my first certificate is correct then my gt grandparents had forgotten to include their deceased son when they completed this census form.)
My husband's maternal gt grandparents had said that 2 of their children were deceased on the census but I had not seen them on the 1901 census and they had married on Christmas day 1891. In 1901 they had only had 1 child living with them and by 1911 all the other children were with them having been born in the intervening years. This meant that it was highly likely that the children had been born between 1891 and 1899 when their surviving sibling had been born. I had been trying to find them since I found this in the 1911 census but with a surname of WARD ruling out those still living and cross referencing with the corresponding deaths was slow going.

These are the 2 I have ordered. The one for Lilian arrived in my inbox yesterday and the names of the parents match. It also revealed another address for them.

These few I have been certain are correct but even with the mother's maiden name we may still not discover the correct person for our family.
Only this morning I was looking for possible siblings for an ancestor with the surname SMITH whose mother had the maiden name CHAMBERL(A)IN born in the Lutterworth district. A search with the maiden name included brought up several children I had not seen for the family. I decided to look for one of them born just before the 1871 census. I found her with her parents living in another village in the same registration district.
Don't think this is only true for common surnames. My husband has an ancestor with the surname CROWSON the maiden name of her mother was SPEED she was born in 1872 in the Oakham registration district. Her father had a brother who married her mother's sister both couples stayed in the district and named their daughter born in 1872 with the same first name.

So shall I say this you will find the new indexes helpful but you cannot rely on them alone to determine you have the correct individual. Hopefully others have found some missing or elusive family now that we have more information.

I have others to look for including missing siblings in a family of 22.

Please leave comments I would love to know how others have used the new indexes and the slightly cheaper copies of registrations.
Posted by Hilary Gadsby at 00:00