Thanksgiving has come and gone here in the US.  I was blessed to have both of my sons, my youngest son's wife, my brother, his wife and daughter, her husband and their two children join my husband and I for a lovely meal and a wonderful weekend.
In an effort to engage the younger ones in genealogy and to add to their limited knowledge of family history, I created a genealogy quiz that we have fun with during the meal.  I really tried to include a question about everyone, sometimes having to google to get more up to date data such as who made the honor roll last semester, whose participated on a winning team, what school did a certain grandfather attend, etc.  Most of the time, however, it is a lot easier and can be drawn directly from family trees, etc.
This was our second year of trying this and I think it was successful.  I typed out each question, cut each into its own strip, folded them in half and put them into a bowl.  The bowl was passed around the table and each person, in turn, drew a question.  If they were able to answer, they received five points.  If they were unable to answer, the question was thrown out to the others and whoever answered correctly, received two points.  The winner received congratulations and a little reward but I am thinking of adding a sort of "trophy" for next year. 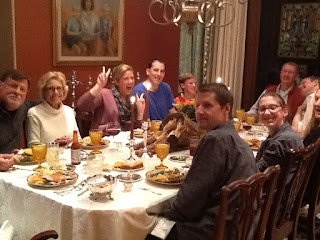 This little event created a lot of conversation, questions and stirred interest in learning more about family.  It was fun to see who knew what, who was "confused" about facts, and who wanted to learn more.
A side benefit was that there were no arguments over politics and/or religion.  As we were focused on family history, everyone at the table shared the experience and could learn something from the answers to the questions.
Interestingly enough, the following evening, minus a few earlier participants, some of the "mid-aged" diners expressed an interest in repeating the game and created their own version.  For this event, everyone had to think of their own question.  Again, going around the table, each person took a turn making up and asking their own question.  Each seemed to try to "stump" the others by asking questions that were more current and not necessarily "known" to the family genealogists.  I guess turn around is fair play and can be a lot of fun.
Next year, I might ask each participant to submit a question or two of their own in advance.   I can type them up and drop each question into a bowl.  That might make it even more inclusive for everyone and make them think a little deeper about their own history.

I hope all of you out there that celebrate the Thanksgiving holiday had a memorable day.  Next time you get together with family, you might want to try your own family genealogy quiz.  It's fun, educational and almost guarantees interaction amongst all.