Having my DNA done on Ancestry several years ago, led to a chapter of my life's journey I could never have imagined. While researching my family's genealogy, I began meeting other researchers, some of whom also happened to be related to me biologically --proven through DNA.  We had to figure out just exactly how we were related however!  That was the adventure.  Soon it became obvious that we needed a place where we could talk to each other easily, share discoveries, ideas, and get to know each other. That's where social media, especially Facebook, came to be so valuable. On Facebook, we could form a group, in this case people interested in Hogg/Hogue/Hogge research especially, and most of us were related to each other., and soon became friends.  On Facebook, it didn't matter if we were from Europe or America, we could talk, share, and compare discoveries easily. Across America also, from New York to Virginia to California, and Wisconsin to Florida!  What a wonderful experience.

Lately I have been studying the Hogg DNA Project which has been going on for about ten years I think.  The study was directed and articles authored by Henry Dwight Hogge, PhD.  Enough people have joined the study, that some conclusions have been made and published.  You can access the data that I draw from for this post at these links: "Hogg DNA Project - Project Results"   Another well-organized site by Henry Dwight Hogge, PhD, and one full of great family information and links, is:  "Hogg DNA Project A List of Hogg Lines"

I wanted to see if I could organize our family group on Facebook, according to the latest developments in the Hogg DNA Project.  I understand that Dwight has identified at least twenty different DNA groups of Hogg descendants in the United States! Wow! Hogg was a popular name in Scotland!  Dwight says that the name Hogg originally described a yearling sheep, so when surnames began, and were generally based on vocation or location, many sheep herders took the name Hogg. They just adopted the name, and now, some 500 years later, we are trying to figure out who is related to whom! What a great adventure!

One of our group members, a cousin from Wisconsin, Ron Hogue, shared another definition that I like and have found true for the family. 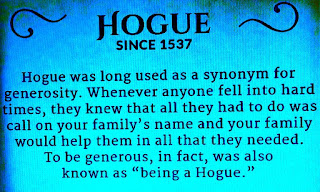 Our Hogue Family Facebook group currently has 62 members. We are always open for new cousins. Some in the group are not related to us, but "friends" of the family, like Douglas Moncrieff, a professional genealogist from Scotland who has helped guide our research tremendously.

Most of the members of our group belong to the Hogg DNA Project
Group I1, cluster 1.  This group connects nine family groups whose DNA show that they share a common ancestor. A few folks in our Facebook group are related to each other, but by DNA not actually related to the I1 groups. By the way, that is not 11 (eleven), that is the letter I, like in Ireland, and the number one,"1". Hard to tell if you are not familiar with the rankings. This is how I believe our group is organized.

It is interesting to note, that in the book, The Genealogy of the Jackson Family, by Hugh Parks Jackson, Hugh Hogue Thompson, and James R. Jackson, 1890, it is stated that the first immigrant in DNA line PA1755, Robert Hogg, b. 1725 in Ayrshire, Scotland, died 1747 in Pennsylvania, was one of nine brothers!  Is it coincidence that nine different but related families form this one DNA group, I1 cluster1? This is one area needing more research.

1. SL1580 and NJ1682 include "descendants of John Hoge b.ca.1580, Musselburgh, Berwickshire, Scotland -- John Hoge was the ancestor of William Hoge, b.1660, Musselburgh, Berwickshire, Scotland, who migrated to America in 1682 on the ship Caledonia, arriving in Perth Amboy NJ, marrying Barbara Hume, d.1745, in Frederick Co. VA. We refer to the descendants of William and Barbara by the code NJ1682." Henry Dwight Hogge, PhD.

In our Facebook group we have several members whose DNA matches this group of Hoggs:  Amanda, JoAnn, and Lee Hogg Williams.

~~~~~~~~~~~~~~
IV.   Perhaps the most famous Hogg line of all Hogg lines is SL1640.
1.  line SL1640 includes "  descendants of Walter Hogg of Prestonpans, East Lothian, Scotland, b.ca.1640 -- Walter Hogg was the ancestor of many Selkirkshire and Roxburghshire Hoggs, including James Hogg, The Ettrick Shepherd, (a famous poet). The lines previously identified as SL1698 and SL1753 have been combined into this line." --Henry Dwight Hogge, PhD

In our Facebook group we have two members from this famous DNA group, Helen B. and Nancy.

~~~~~~~~~~~~~~
V.   Some of the earliest Hogg family members came to Colonial Virginia, and have records recorded in the Virginia Colony as early as 1657. In the Hogg DNA Project, this group is identified as:

In our Facebook group, our own Gary H. is a descendant of this group.

This line, VA 1658, includes my own cousins, children of my mother's sister. My main Hogue line is through my father.  My mother's sister married a man named W. R. Buck, and his mother's line shares this DNA line as well.  Of course, I am only related to my first cousins, not their father's line of ancestors. Still, it is an interesting connection.

Isn't it amazing!  Due to the popularity of DNA testing in genealogy; the hard work of scientists like Henry Dwight Hogg, PhD, in organizing and completing DNA studies; and the ease of meeting people as never before by internet programs like Facebook, Ancestry, and many more sites, we are able to meet cousins all over the world, and trace our ancestry back many centuries.  The Scottish people must be amazing, because the people in our Facebook group, all descendants of Scots, are amazing—what a joy and a gift to know them! 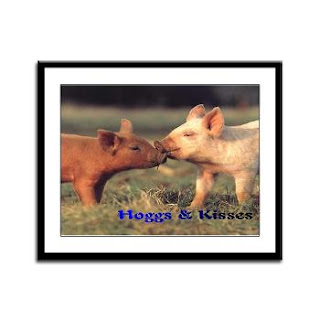 "Sharing Love with Family, Hoggs and Kisses"
by artist and family member Lee Hogg Williams
- available as a puzzle or a dry erase board along with other fun items
at:    https://www.zazzle.com/hoggs_kisses_dry_erase_board-256007096373918872