Walter Hindmarsh, like his father and brothers, was a shepherd.  Unlike his brothers who walked the Northumberland hills he left England and hopped the border to Scotland.
Walter was born to William Hindmarsh and Margaret Grieve in a Northumberland farm.  The family home was called Carshope, in Alwinton Parish just south of the England/ Scotland border; he was baptised in January 1792 which wasn't too long after his birth when comparing it with census returns.
I knew from various sources including this one:
Inserted here by desire the children to William Hindmarsh and Margaret Grieve his wife in Carshope, Parish of Alwinton
William son born 7/10/1790
Walter son born 20/1/1792
Thomas son born 6/1/1794
Elizabeth daughter born 25/11/1795
Adam son born 1/10/1797
Jane daughter born 29/4/1802
Alexander son born 29/5/1805
All baptised Harbottle
that Walter was one of seven brothers, but so far I've only been able to confirm the names of five of them: William, Walter, Thomas, Alexander and John (John was noted elsewhere as the 7th son).  They also had two sisters, Elizabeth and Jane; Jane is my great-great-great grandmother.
I have been using FindMyPast to search for my Northumberland family over the last couple of months.  Their specific record set of transcriptions by Northumberland and Durham Family History Society was one of the reasons I took out a subscription and it's been fantastically helpful.  But sadly I drew a blank on Walter and feared he'd died young.  However I tried searching for him on Ancestry and up popped a reference to an English couple called Walter and Isabella Hindmarsh, living in Morebattle parish, Roxburgh county in south Scotland.
Although this reference came from Ancestry in Utah it says that it had been transcribed from source, the General Register Office for Scotland. However there was no scan of the original document.  This, then, was a job for the Scotland's People website. 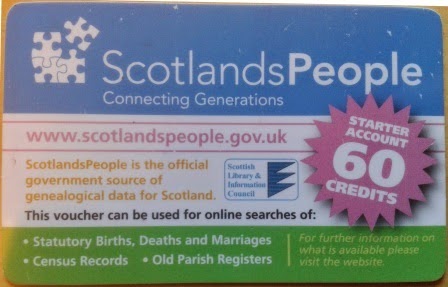 Although I'm English, by the time I took up family history I was living in Scotland.  It was pre-internet (olden days!) so I didn't have access to any online resources or any English ones at all so I spent a few fascinating pre-motherhood years learning about my husband's Scottish family from occasional day-trips to the GRO in Edinburgh and a few visits to Argyll.
After a few years away from genealogy my interest was kick-started again and I had the chance to use sites such as Genes Reunited, Ancestry and more recently FindMyPast.
But whether paper or pixels, it's a huge shock working with English records after you're used to working with Scottish ones.  The amount of information provided is so much greater - so much more useful - in Scottish records.
So I found my uncle Walter in the 1841, 1851 and 1861 Scottish census returns, just as I would for his brothers in the English returns, and on Scotland's People could [pay credits to] view a scan of the original document.  But I could find no record of his marriage to Isabella and could not prove that Morebattle Walter and Alwinton Walter were one and the same man. In both England and Scotland at that pre-census time there was no formal registration so I will have to search through parish/non-conformist registers to find their marriage.
In 1841 William and Isabella were barely over the border in Scotland - Kelsocleugh Farm sits in the strange lumpy borders landscape just north of English Alwinton and the Northumberland National Park. There was also another family living at that farm, William Hall and his family.
The 1851 census for Morebattle describes William as an Ag Lab (Agricultural Labourer) and with him and Isabella live a married Ag Lab servant called James Young and an unmarried house servant called Agnes Hall.
Isabella was older than Walter and she died some point between the 1851 and 1861 censuses, I haven't yet identified when and where.
In 1861 Walter is living with his domestic servant called Margaret Fiddes in Yetholm, at the Cross Keys.
And then I hit the jackpot: I found Walter's death certificate.
Most obligingly for my purposes, Walter had died in Scotland, specifically in the ancient town of Kirk Yetholm
Interestingly Kirk Yetholm is on some main roads to England (see this Old Roads of Scotland website) so if he wasn't driving sheep along them, he perhaps trudged or rode them to find work.
Walter didn't make it to the 1871 census.  He died on the fourth of November 1869 at 8am, after being ill for three years with a cerebral spinal disease.  Curiously Margaret Fiddes, the informant, who was present at his death, had her relation to him noted as Inmate.  Looking back at the census returns to write this blog post I see that a Margaret Fiddes was a female servant on Kelsocleugh Farm back in 1841 and his domestic servant in  in 1861. Intriguing....  I'm catching myself looking at the certificate again, seriously wondering if it says Intimate, not Inmate.  Maybe she was just a very loyal servant.
And the identifying on the certificate of Walter's late wife as Isabella Hindmarsh, maiden surname Hall, would suggest that their 1841 neighbours on that farm were Isabella's brother and his family.
But the key piece of information that I was looking for was the names of his parents: father, William Hindmarsh, shepherd (deceased) and Margaret Hindmarsh, maiden surname Grieve (deceased). Proof.  All that information (and more) from one death certificate, it's amazing. Even the English certificates I've spent a tenner on ordering have nothing as comprehensive as this.
My favourite piece of information is definitely the mother's maiden surname - what respect for women, acknowledging they had an identity pre-marriage!
© Original text copyright Lynne Black, 21 February 2015
Posted by Starryblackness at 10:00