Many of us have a special attachment to a place where we once lived or our ancestors once lived. Making that place the subject of a one-place study can be so rewarding, not only in uncovering fascinating snippets of information but also in helping others to piece together information about their ancestors who lived and worked there.

Nine years ago I started a One-Place Study of Kingston in the Isle of Purbeck. In this blog, I’ll tell you a little more about the village and about some of the people who helped shape its destiny.

Kingston is a great example of a small estate village, the extent and layout of which has remained relatively unchanged over the last century. It is renowned for its Romanesque ‘Cathedral of Purbeck’, designed by G. E. Street, which remained a private family chapel for over 40 years. Originally a chapelry of Corfe Castle, Kingston became an ecclesiastical parish in its own right in 1877, but still forms part of Corfe Castle parish for local government purposes. Almost all buildings are built from stone quarried locally and most are now listed. Kingston is of particular interest to me being home to my ancestral family for more than a century. 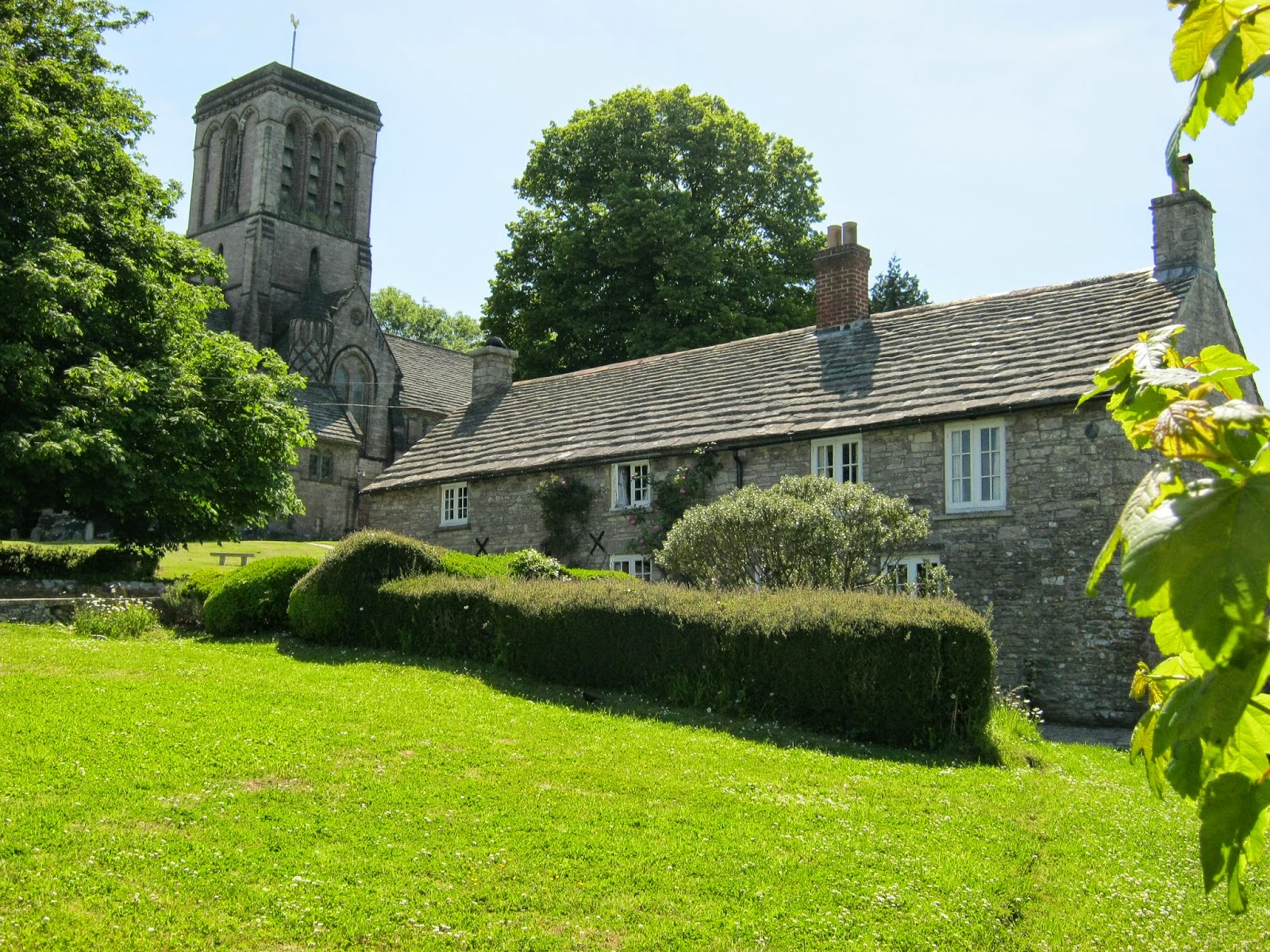 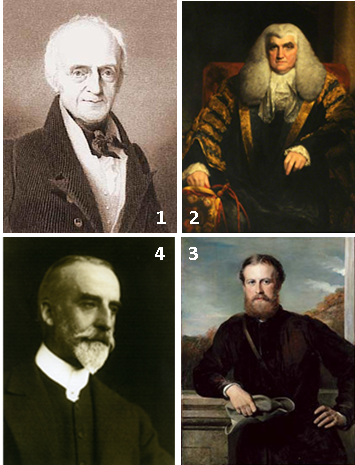 When philanthropist Pitt [1] became lord of the manor towards the end of the 18th century the villagers were in considerable poverty and were reliant on smuggling and wrecking (deliberately causing ships to run aground in nearby Chapman’s Pool). He put an end to this by rebuilding the village just west of its former location and providing employment for men, women and children in a new sailcloth and rope manufactory. He established a school (supported by subscription), a Sunday school and a poor house (without any windows overlooking the street!). Unfortunately his investment in the village almost made him bankrupt and he was forced to sell the Estate in 1807.

The next owner was John Scott [2], the son of a Newcastle coal-merchant who had eloped to Scotland to marry the daughter of a Newcastle banker against his father’s wishes. He was a great friend of George III and the confidant of many members of the King’s family. He was the longest-ever serving Lord Chancellor, holding the role in two stints totalling over twenty-five years. He became very fond of Encombe, travelling down from London as often as possible although the journey took three days each way. When the Earl retired from Parliament in 1827 he gave a tea for 200 villagers.

In 1833 he replaced the decaying chapel-of-ease with a new church [5]. Around this time my 4 x great grandfather, a carpenter and Sunday School teacher arrived in the village with his young family. The status of workmen with a skilled trade was recognised and on Sundays they were allowed to wear a frock coat, striped trousers and a top hat. At Christmas the Earl or his agent visited every aged villager to ensure they were provided for, and every employee received a ton of coal, enough to last the year.

The Third Earl [3] was great-grandson of the First Earl and inherited his title in 1854 at the age of just 8. He was extremely popular with the Estate workers and tenants, always having time for a chat and wanting to learn of any difficulties they faced, which he did his utmost to help overcome. He contributed 2d in the shilling to the village clothing club and 1d in the shilling to the coal club.

The villagers led a hard but happy life. There would be concerts in the winter and open-air dancing in the summer. At Christmas time the Earl and Countess would entertain guests at Encombe, and on the following evening would give a party for his staff. In the cellars there were seven 150 gallon casks of beer! In 1897 he gave tea for Estate employees and families to celebrate Queen Victoria’s Diamond Jubilee.

Although busy, the village always looked lovely. The Third Earl supplied rose-trees to every householder to grow around their diamond-paned windows. The woodwork of their cottages had to be painted in the estate colours of stone and purple-brown. The streets were always tidy being brushed regularly. Only the shepherds and cowmen were allowed to keep a dog as they were trained not to foul the pavements! The village was much admired and drew visitors by carriage and char-a-banc from Swanage.

There was a new school [10] and master’s house, erected in 1856 in memory of the Third Earl’s parents. There were two communal bake-houses. The blacksmith’s shop had three forges going all the time. There was a farriers and a carpenters’ yard. The village pub, the Eldon Arms, was let to a tenant who undertook to supply the village with milk. Beer was brewed on the premises. The doctor came on horseback from Corfe Castle. Sunday was kept as Sunday otherwise his Lordship would want to know why! 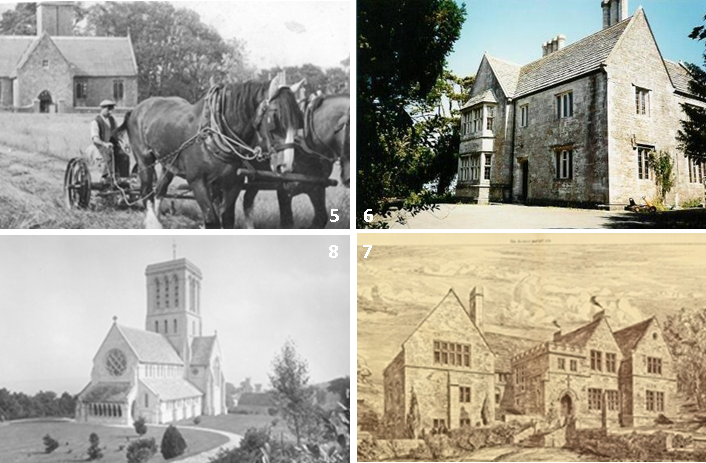 Unfortunately, the Third Earl became infatuated with the wife of a minister, constantly visiting her at the vicarage [6] or inviting the minister and his wife to Encombe. He then built a very substantial new vicarage [7] on the edge of the village so that he could visit more often away from the prying eyes of villagers. However, word of this reached the Bishop who arranged for the Earl to be disbarred from the House of Lords. The Earl petitioned Queen Victoria who instructed that he should be readmitted. The Bishop then did the sensible thing and moved the minister to another living. Not only this, he persuaded the Earl that he should build a very ornate private chapel as a public show of remorse.

The architect for both the new vicarage and new chapel [8] was George Edmund Street, with work on the latter starting in 1874. When the new church was completed in 1880, the Earl gave the Estate employees a holiday on Good Friday, on the strict understanding they attended the morning service! The new church remained a private family chapel for over 40 years and the estate workers spring-cleaned it every year before Easter.

Rev. Spencer Compton Spencer-Smith (1842-1911) [4] provided great stability, serving Kingston for almost 40 years, first as Curate and then as its first Vicar. My 2 x great-grandfather was his coachman and lived in the stable block attached to the new vicarage.

The Third Earl was a keen sportsman and a good shot. A small pack of hounds was kept and the local gentry brought their horses and grooms to Encombe two or three times a week during the hunting season. The Earl had one cricket team and the Rev. Spencer-Smith, having been a Cambridge Blue, had another.

Fastest vicar in the world

While on the subject of sport, the Vicar of Kingston from 1932 to 1938 was Revd. F. S. Horan, known to his family and friends as Seymour. While studying for his theological degree at Cambridge in 1895, his name hit the world headlines. He had taken up running, and he was “by far the best runner at all distances that ever went up to the ‘Varsity games. Indeed, no Oxford or Cambridge man ever ran the three miles inside of 15:00, yet Mr. Horan had on half a dozen different occasions beaten those figures, as well as reeling off the mile well inside 4:23.” Picture [9] below shows him winning the three mile race in 1895 and setting the then world record. Seymour was a man of charming character, earnest and highly esteemed, especially in Royal circles having taught two future Kings at Osborne: Edward VIII (who abdicated) and George VI.

The turn of the century brought new hopes and new-fangled machinery! In 1903 a gas engine was installed to generate electricity for Encombe House. It ran two days a week and stored a week’s worth of electricity in accumulators. Mains electric didn’t arrive until the mid-thirties! In 1910 a traction engine, “The Earl of Eldon”, was acquired and used for various Estate purposes, including powering the saw mill. In 1914 a new Reading Room was provided.

When war came in August 1914 the Third Earl gave orders that every man entering the services would have their job back when they returned from service. Sadly thirteen men connected with the village did not return and they are commemorated on a memorial plaque in the new church.

After the war an ex-servicemen’s club was founded, along with a football club and slate club. Social evenings and whist drives were held.

In 1921 the Third Earl finally conveyed the new church to the Church Commissioners – it had remained as a private chapel for over 40 years. The Third Earl died in 1926 and the Estate passed to his son, Sir Ernest Scott.

In the mid 1930’s Rev. Horan persuaded Sir Ernest to allow a Church Fête and Flower Show to be held at Encombe House. It was a great success and repeated for many years. Rev. Horan also secured permission to turn the old church into a village hall and a number of plays were broadcast on BBC radio from there. Rev. Horan and his wife also started up Scouts, Cubs and Brownie groups and a Women’s Institute which flourished for many years.

In 1939, 94 children and their teachers were evacuated from London to Kingston and 25 children were evacuated from Southampton the following year. One evacuee is still in contact today. Twenty men from Kingston formed the Home Guard armed initially only with sticks. All iron work and railings were removed from the estate to help the war effort. Three men connected with Kingston were killed. 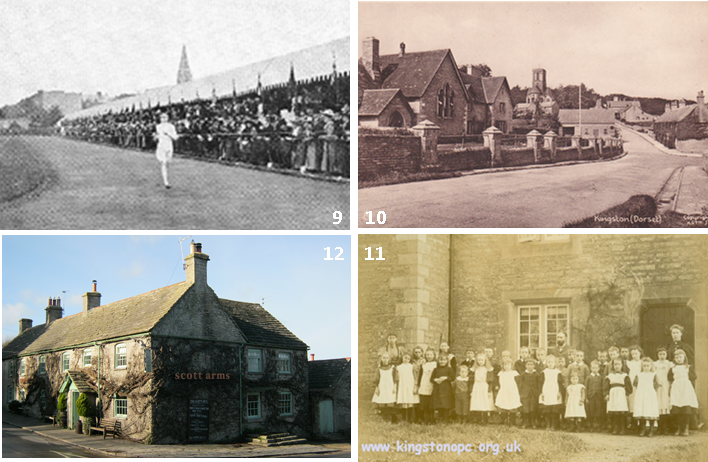 The village retains its pub, now called the Scott Arms [12], but the school closed over 50 years ago and the post office over a decade ago. The Scott Family ended its 186 year ownership of the Encombe Estate back in 1994 and it is now in the hands of airline tycoon James Gaggero.

The old church, for a while used as the village hall, is now a private residence. Neither the old or new vicarages are home to any clergy as Kingston now falls within a combined benefice of three parishes with a Priest-in-charge based at Langton Matravers.

By 2004 the population had fallen to 100 and has since fallen further as Estate cottages have been privately purchased and let as holiday homes.

The village website is continually evolving and includes a wealth of genealogical information, census records, parish register transcriptions, probate records etc. along with features on families, photographs, old postcard views, local history etc. There is a facebook group with over 100 members which continually yields more information about Kingston of yesteryear.