Bringing Betty out of the Shadows - A Research Review

The further we go back in family history, the more shadowy  our ancestors can appear - especially on the female side, where we don't usually have the benefit of a photograph or portrait,  or knowledge of an occupation to define the person.

I have three fellow WG bloggers to thank for the inspiration for this post  - Kate's recent  article  about female ancestors Hidden from History.  Cassmob (Pauleen's) Three Rs of Genealogy Research (Revisit, Record,  Revise)  and Tina's  post on Finding Family Stories


They prompted me to look afresh  at my research  on  my great, great, great grandmother  Elizabeth Danson, nee Brown,  who was little more than a name to me  as the wife of Henry Danson, yeoman farmer.

I had never written a profile on Elizabeth, so I set out to see how I could bring her more to the fore of my family history  by  revisiting  the records.

ELIZABETH AS A DAUGHTER
My first information on Elizabeth came in her Marriage Bond [below]  which gave her age - 20, so born c.1766 and her father's name as William.

The English Christening Records on Ancestry include an Elizabeth Brown at Poulton-le-Fylde, Lancashire born 27th June 1766 - father Wiliam, but no mother's name cited.  A search for a William Brown marriage in Poulton c.1760 traced  only one possible entry - a union with Ellen Clegg 17th November  1751 - this could be Elizabeth's mother, given that the witness to her marriage was a Nelly Clegg - Nelly being the diminutive of Ellen.

ELIZABETH AS A WIFE 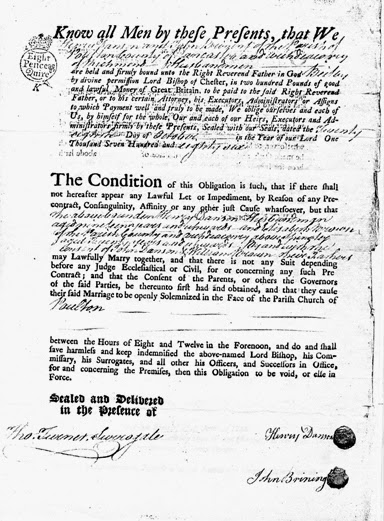 Elizabeth and Henry  married 29th October 1786 at St.Chad's Church, Poulton-le-Fykde Lancashire, as recorded in the Poulton Parish Register, with one of the  witnesses Nelly Brown - Elizabeth's sister perhaps?

I was  lucky enough to trace a marriage bond at Lancashire Record Office.  This was a promise between two people, normally the groom and a friend or relative (in this case Henry's brother-in-law John Bryning) that,  if the marriage proved invalid in the eye of the law,  they would pay a penalty to the church of a substantial sum of money - in this case £200.


“Know all men by these present that we, Henry Danson and John Brining of the parish of Poulton, County of Lancashire, are held and firmly bound by….two hundred pounds of good and lawful money of Great Britain, sealed with our seals, dated twenty eighth day of October in the year of our Lord one thousand seven hundred and eighty six….there shall not hereafter appear any lawful let of impediment by reason of precontract, consanguinity, affinity or any just cause but that Henry Danson, husbandman aged 19 years and Elizabeth Brown….aged 20 years, with the consent of John Danson and William Brown, their fathers…….”

So the marriage bond was dated a day before the actual wedding.  Marriage licences could be obtained as an alternative to having the banns read.  They enabled marriages to take place at any time and were useful  if the marriage had to take place quickly or be kept quiet for some reason.

Henry and Elizabet's first born child, daughter Margaret was born 7 months after the wedding - was that the reason for a hasty ceremony?

Obtaining the marriage licence was always a more expensive way of ensuring the legality of a marriage and never as popular as Banns.  That Henry could afford this form   seems to suggest that the family was relatively well off.

ELIZABETH AS A MOTHER
The young Elizabeth went on to have  seven children between 1787 and 1811 - Margaret, John, William, George, Peter, Nelly, Henry, and James - with her two youngest sons born  when  she was in her 40's.  Their Christian names had family significance, with Margaret, John and William named after grandparents, Peter after Henry' (senior)'s   grandfather and Nelly (Ellen)  a name in both the Danson and Brown families.

A sideline on family life was revealed in the Family Bible  where a page headed "Be Good to the Poor" had been scribbled on by various member of the fmaily, criss crossed on the page in what  can only be described as scribbles.   Elizabeth's contribution can just be made out  in the middle of the section here, with Henry's above it left.

The entries cite the family living at Trap Farm, Carleton and signatures include that of "Ellie Simpson, Carleton, Trap, Servant, 1830".  The fact that servant Ellie   was included in the activity  somehow casts  a lovely light on the household informality - though the fact they used the Bible for these scribbles  does raise other issues!

But family life was not without tragedy.  In the space of 12 years (1827-1839), Elizabeth saw the loss of her husband and three children.


ELIZABETH AS A WIDOW
Elizabeth was left a widow on  21 October 1839 and a copy of Henry's  will dated 26 August 1833 was obtained from Lancashire Record Office.It noted:


ELIZABETH AS A FRIEND
I came across this short but  beautiful testimony to Elizabeth  almost by chance during a  quite casual browslng of  British Newspapers Online 1710-1953 on the website Find My Past. -


"Blackburn Standard Wednesday 20 May 1840:
Betty, widow of the late Mr. Henry Danson, yeoman, Trap Estate, Carleton, near Poulton-le-Fylde. She was much esteemed, and will be greatly regretted by a large circle of acquaintances".

The Blackburn Standard is not a newspaper I would have every thought of looking at for events in Poulton, so it was also a lesson to widen  a search beyond the obvious.

But that little piece somehow brought Elizabeth (or the more familiar Betty)  alive for me, as no other record had done.

Postscript:  Elizabeth (Betty) Danson, nee Brown died  seven months after her husband Henry. buried  on 13th May 1840 at the age of 73, predeceased by at least four of her seven children - Margaret, John, William and James. 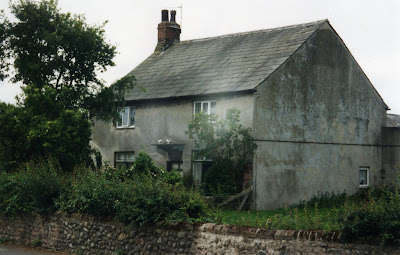 Trap Farm, Carleton - Elizabeth's married home c.1827 at the time of the scribbles in the family bible [see above]. Her sons Henry and Peter were living there with Henry's large family in the 1841 and 1851 censuses.  I took this photograph c.1998 and the property has undergone major refurbishment since them.