I’ve only been working on genealogy for about 5 or 6  years. At age 67 now, my interest in genealogy started late in life. However, I quickly fell in love with the ancestor hunt.   Every time I added a generation, I could feel my roots deepening, and my sense of belonging to this global society increasing.

As I worked, several things happened unexpectedly. I met cousins I never knew existed, who were working on their own family trees.  In fact, before long I’d met a hundred new friends and cousins! Then we took our DNA tests, and more worlds opened for us--more connections!  What an amazing experience and unexpected pleasure for late in life. Having always been an outgoing person before I became disabled with heart disease, unable to drive anymore, and pretty much confined to home--having been a therapist even, one who loved facilitating groups--I naturally gravitated towards forming groups.  Without thinking, it seemed the natural thing to do. As I met more and more people researching the same family lines, I thought to dovetail with what was then this new thing called “social media”--Facebook especially, and form groups of like minded people!   It has been wonderful! I started out forming a group of family members for whom we were planning a reunion, what a great way to communicate. Then I discovered that several in the group were interested in genealogy, and what fun we had finding relatives and sharing the results!  This incorporated most of the direct ancestral lines on my mother’s side of the family, including the surnames Kearse, Houchins, Langhorne, Spangler, Steptoe, Callaway, Stovall, Burton, Turner and many more! This group has grown to 75 members!  What a joy! Overwhelmingly this is a group of English, Irish, Italian, and French heritage, with several other national origins represented as well of course.

Many of this group's ancestors settled in the mountains of South West Virginia soon after coming to America, I was interested in joining and later helping admin a group called Mountain Top Families which explored the heritage of people with ancestors from that area of Virginia including the counties of Patrick, Franklin, Floyd, Henry, Roanoke and some others. Thanks to the founders of this group, it has remained a thriving, active, and informative group who shares pictures, tells stories, and cooperates in genealogical research. I have to thank Beverly Belcher Woody, Patty Lawson Kiser, and Jenzy Fay McPeak Ryan for their incredible efforts in founding and leading this vibrant group of 703 at this point! Many of us have discovered we are related to each other in one way or another!  A lot of us have now taken our dna tests, and have been so excited by all we have learned and need to learn, that we started a spin-off group called the Patrick, Franklin, Floyd, and Henry County, Virginia GEDmatches and Ancestry DNA Posting Group!  It has been a wonderful place to learn, get help, compare matches, and again, meet new family members! 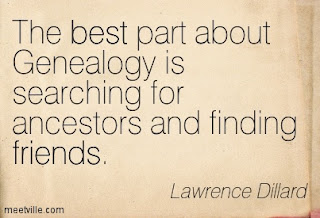 Since I was the group person and the genealogy addict of our family, I decided to start a Facebook group for my husband’s family, his paternal line, as well!  Like the others, it has swelled to 99 members, and we have met people from all over the country, making friends of cousins! We talk history, we correct inaccuracies, and we get to know each other better.

Next I decided to do the same for my own paternal lines, Youngblood, Hogue, Vance, Spear, Van Winkle, Vreeland, and many more! As it turned out however, I had a lot of Hogue dna cousins!  So many that I started a group just for our Scottish side--my father’s maternal line.  We now have 46 in our Youngblood group, and 61 in the Hogue family group.  Of course, some of those people are members of both groups. The Youngbloods and Spears are mostly of German and Dutch ancestry.

The Hogue group of Scottish ancestral heritage, included Hogg, Ogg, Jacksons, Pattersons, Fultons, Boyds, McNair, McWilliams, Church, Hillis, Hillhouse, and many other surnames. This became my hardest working group, working-- as in research working. So many of us were into genealogy, that the focus of the group stayed right there.  It helped that we had members who had been researching this family for 20 or 30 years of course!  We even met a wonderfully talented professional genealogist who lived in Scotland who volunteered to help us in our efforts to fill out our family trees and make our connections, Mr. Douglas Moncrieff.  We have also gotten involved in DNA, and the International Hogg Family DNA Project admined by Dr. Henry Dwight Hogge, PhD.  You can find information about this project at http://hdhdata.org/hoggdna.html.  With a team effort, our group is close to knocking down a brick wall that has haunted us for a long time! I would never have made this kind of progress without this family group to support, help, and encourage!

With the advent of popular DNA testing, many people have discovered that they are not their parent’s biological child.  I have formed one group for a person who wrote to me and had just discovered a kinship to some other family members.  So we started an immediate family group to introduce them to each other,and to encourage the exchange of photographs, stories,and the building of relationships! It has been a wonderful experience. 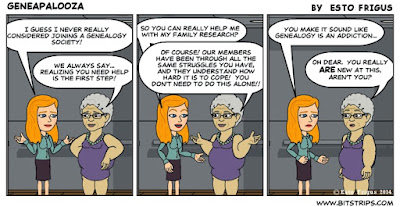 Of course, there are a multitude of Genealogy and DNA groups on Facebook,and I belong to many, but far from all. If you belong to a group that you find especially helpful, I wish you would comment about it in the comments section of this blog post.  Some of the groups I belong to but had nothing to do with starting, are still my extended family groups, some are historical or society groups, and some are DNA or Genealogical Research Groups, here is a listing of those I belong to: (alphabetical order) Many of these groups are not public per se, they are for people with ancestors by the surname being searched, or for people actively engaged in genealogical research. Check out their requirements for joining.

There are many more groups on Facebook of which I am not a member, of course!  I find these groups generally full of caring people interested in genealogy and willing to guide and teach as well as share!  It takes a village to learn even half of what we need and want to learn. I encourage you to reach out, join, stretch, and improve your genealogical experiences in every way you can.  I’d love to hear what you like to do!