Remembrance is when someone remembers things

In the UK this word has become synonymous with the commemoration of those who served in the military especially those who lost their lives in service of their country.

After WW1 with the loss of almost 20 million people and the impact this had on the lives of so many more, the commemoration of the Armistice on the Western Front on 11th November 1918 at 11am started the following year. Originally the commemoration known as Armistice Day was on the anniversary.

However during WW2 Remembrance Sunday was introduced as an aid to wartime production (something about this does not sit right but I have been fortunate enough not to have lived in a country under bombardment), this tradition continues to this day.

In recent years, approaching the 100 year anniversary of the outbreak of WW1 this year, and with the passing of the last of the veterans from that conflict, many of those too young to remember the fallen have also commemorated the Armistice of WW1 on the anniversary. The commemoration was a one minute silence but in the UK we now have the two minutes in which to reflect.

Unfortunately neither war has stopped the need for military personnel although many are now deployed in peace keeping roles across the world. So the list of the fallen and injured grows ever longer each year. We must remember them. 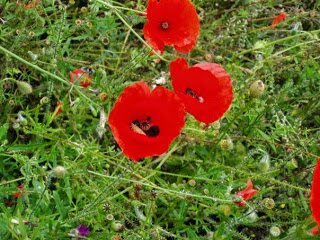 OTHER FORMS OF REMEMBRANCE


When I started to think about my post for this month I wanted to discuss more than the commemoration of those who have served their country in the military.

There are many other members of our families who will not have served in the military for whatever reason. We must not forget them and their struggles.

So how can we as genealogists ensure that our families are remembered for who they were.
Blogs such as this and our individual blogs (which can be found on the list of authors) allow us to share what we know about our family and tell our stories.
Some of us have started to use videos as a way of recording what we know.
Online trees and many of the social media sites can also be a way of getting the story across.

However you do it make sure you share those memories.
If you create something this month why not enter it into the Share a Memory Contest at DearMYRTLE's Genealogy blog.

This month I want remembrance to be more than thinking about loss it should be about the joy of living and the ability to think back on the good times even when times are bad.