A Transatlantic Collaboration on a Yosemite Traveller 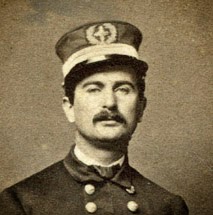 You come across some amazing stories when you start to delve into family history and such was the life of John Kinsey Smedley (left)  - a naval engineer in the American Civil War, later inventor and traveller who wrote an account of his journey into the Yosemite Valley in 1874.

I am grateful to John's  great granddaughter Gail in California  for supplying me with photographs and other memorabilia, whilst I have undertaken additional research to compile this profile - a true transatlantic genealogy collaboration between Scotland and the USA.


John Kinsey Smedley  was born 10 July 1839 in Willistown, Pennsylvania   the fourth child of Jeffrey Smedley (1811-1861) and Catherine Denny (1803-1877)); with siblings  Lydia, Amy, Isaac, Abiah T., Catherine Ann, Anna Mary, Jeffrey and Charles.  He was a fifth generation American of English Quaker  heritage.   So far the origin of his distinctive middle name has not been traced.  It was not a name from either his parents or grandparents,  though his uncle was Kersey Smedley  - a similarity in spelling which deserves more investigation.


John as a Civil War Naval Engineer
In September 1862 at the age of 23, John  enlisted in the Union Navy as a naval engineer. He  participated in blockade duties and attacks on the Confederate forts in Charleston Harbor including  Fort Sumter,  and served aboard vessels Nantucket, Wabash, Mohican and Tullahoma.

The family is fortunate to have details of his service, written down by John's daughter Hattie. 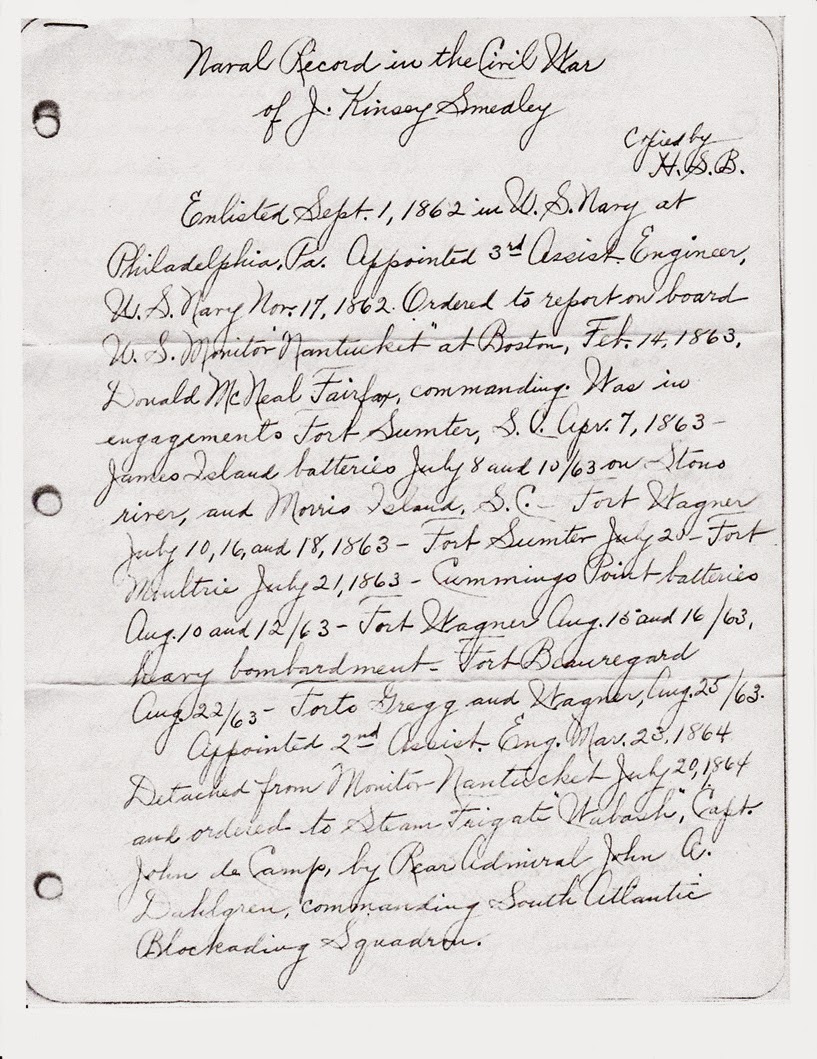 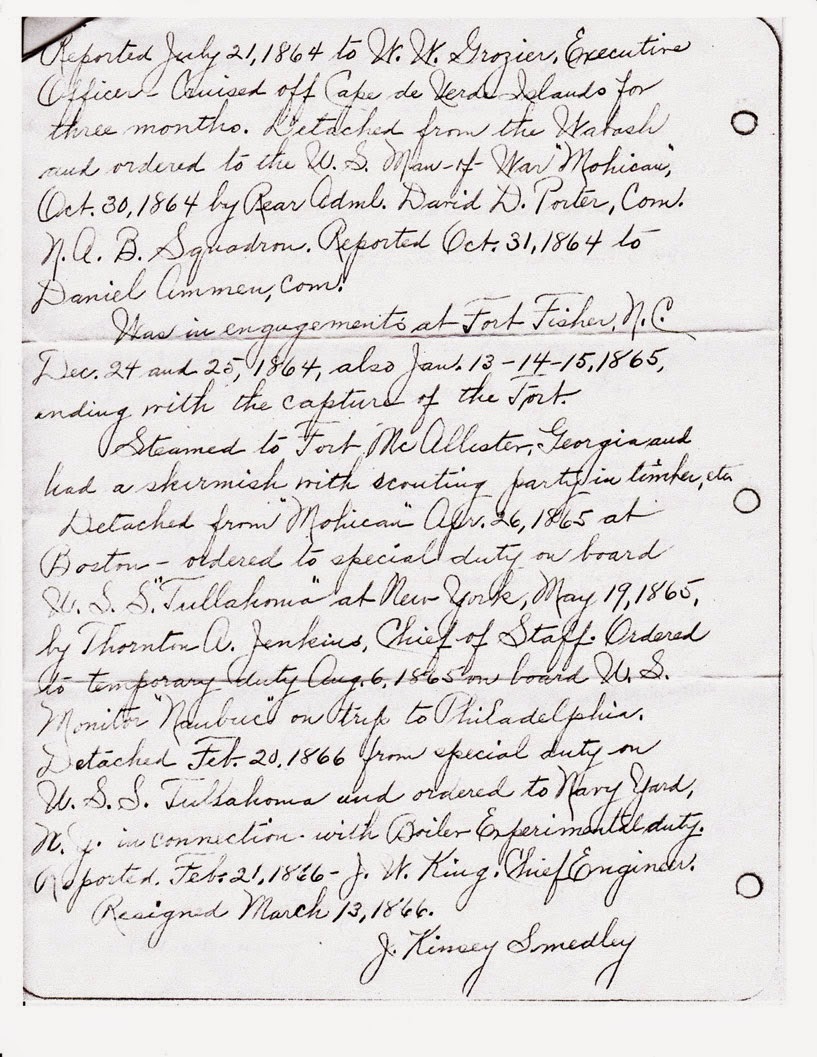 John Kinsey Smedley resigned from the Union Navy on 13 March 1866, and the family  still holds, among the family treasures, his naval sword, sheath, and belt, shown in this photograph below. 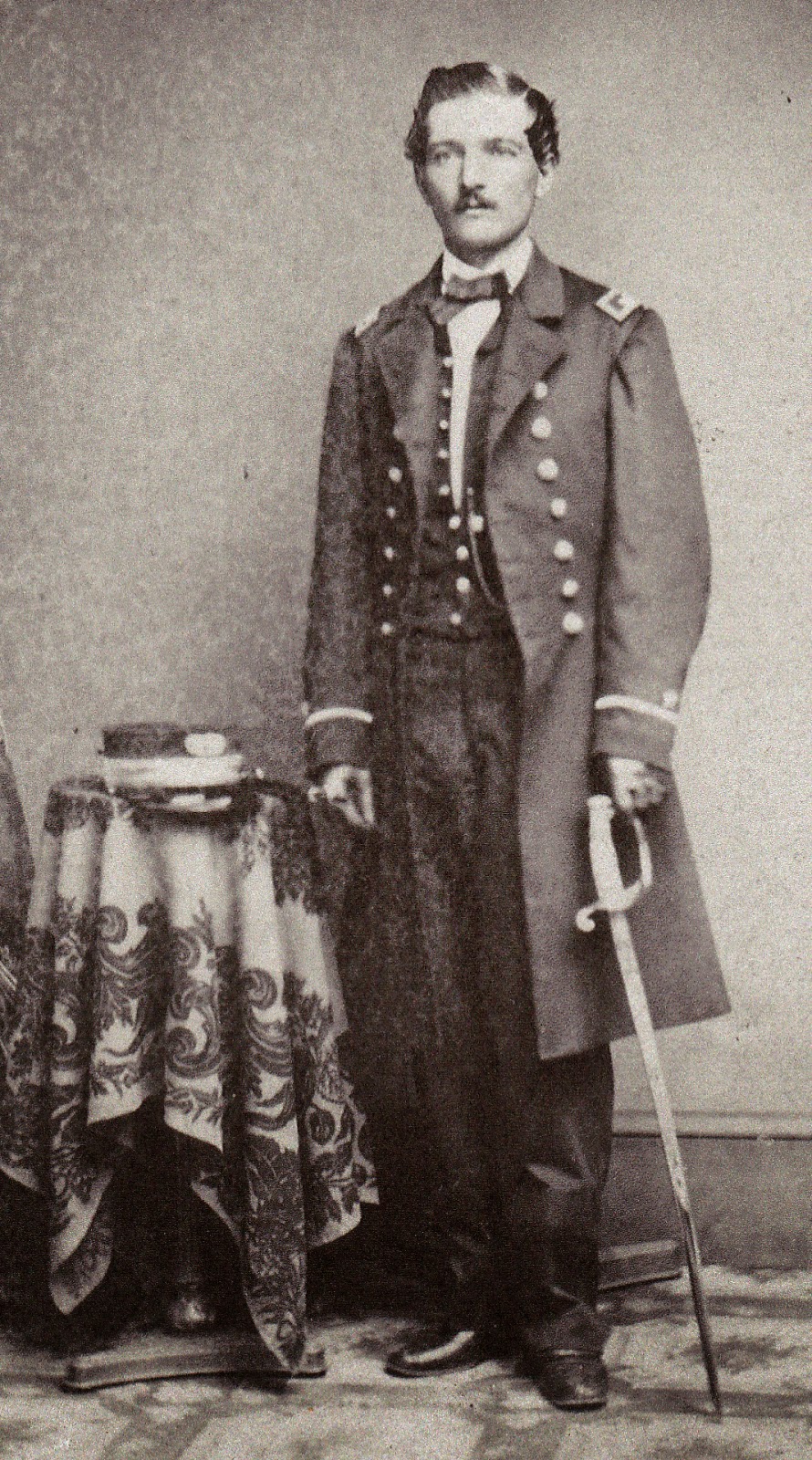 Unlike his brothers, John's life was to move far beyond Pennsylvania to Utah and California.
According to a story  passed down through the family,   he was present  on 10 May 1869 at the driving of the Golden Spike at Promontory Summit, Utah to mark the joining   of two sets of rail tracks on the  completion of the Transcontinental Railroad.     This meant that travel time between America's east and west coasts was immediately reduced from months by wagon  to less than a week.

In the US Census for 1870 John  was working as a steam engineer at Corinne, Box Elder County, Utah.

In 1872 the California Voters Register showed John to be in Sacramento where he was staying at the Pacific Hotel.

1874 - a Yosemite Journey
In 1874 John wrote an account of his trip by coach and four to Yosemite Valley - in a journal which has been transcribed by his great granddaughter. 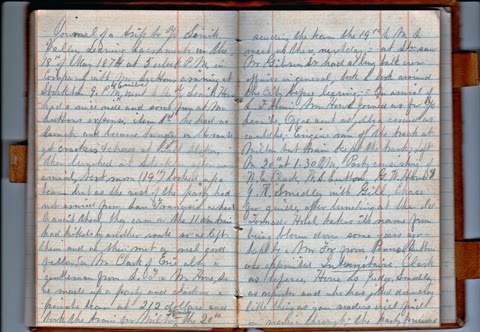 “Crossed the Tuolumne (River) at 9pm.   Arrived at the foot of Rattlesnake Hillat 10pm. Then it was our turn to walk.

Just think of a hill two miles long and rising 1700 feet.  We all got out to walk but Sutton who was the smallest of the party.  Up, up, up we went and I thought we had walked five miles when Chase  said "This is halfway."  Oh goodness.  Only a mile, and up, up another.  Then we began to change riding as some had done the first quarter mile.  Around and around, thinking every turn would be the last. Coats and hats off, and 11pm.  By this time, we had all climbed in the carriage.

Finally, we heard the bark of a dog, knowing a house was near.  In a few minutes we reached Priest's, the best place and table in the whole land, and a pretty girl to attend to the table.  They were all snug in bed, but when we called they got up, and in 20 minutes, had a steaming hot dinner of fricasseed chicken, fried ham, beefsteak, good coffee and tea and milk, pie and cake and strawberries.  Such a luscious supper!  May Priest's shadow never grow less!

We enjoyed our supper and did not tarry long before retiring where we had good beds and slept sounder than ever.  In the morning, Saturday the 23rd, the sun was shining beautifully and when I got up and went down, I saw we were really above the clouds and to look down that awful long hill I could only laugh and think we would have the best of Old Hill when we returned.  Sure did!”

This is a section of Old Priest Grade – or Rattlesnake Hill as John Kinsey Smedley knew it, so named for Rattlesnake Creek flowing down the centre of Grizzly Gulch in Tuolumne County, CA.  It’s a shorter, narrower, steeper (15-17% grade) route up one side of the gulch.  It rises 1700 ft. in elevation in 2 miles.  The main highway on the opposite side of the gulch known as New Priest Grade (built in 1915) takes over 6 miles to climb the same rise in elevation with countless switchbacks.

In California John worked as an engineer for rail, mill and mine companies from Monterey to Silver Mountain in Alpine County.  In the same journal as he recorded his Yosemite journey,  he jotted down notes about turntables being in good shape or needing repairs, and work needing to be done to mill and mine machinery.


At the age of 38 in 1878, John Kinsey Smedley  married,  in San Francisco,  Ella Chase Taylor ten years his junior, with their only child Harriet (Hattie) Bell born a year later.

Ella’s mother died when she was a young girl and she was raised with her father’s sister’s family back east,  while he went out west to Sacramento, California to open an apothecary shop and tend, as a doctor, to injured gold miners.

Her father  remarried whilst in California and he and his second wife had a daughter  Eliza. On the death of her father and step mother, Ella traveled to California by ship around the “horn” of South America – with a piano, no less - to  look after her younger half sister.

The voters' registers and census returns  continued to track John's moves across the state from San Francisco  to Alameda.

In the 1889 census,  he was still in San Francisco, described as an Engineer with Ella's  occupation given as "Keeping Home".

John later found steady employment with the US Post Office but his love of engineering did not fade and in 1898 he invented a "New Streetcar Fender" (right)   to be attached to the front of trolley cars - though there is no evidence that it was actually adopted in practice.

Ten years on, in 1900, the family was in Oakland, Almeda with John described as:   aged 61,  a Stationary Engineer.  Besides Ella and Hattie was a "roomer" - 45 year old Elizabeth Soundry, a German widow. With special thanks to John's great granddaughter Gail
for her contributions to this post, which is based on earlier posts on the Smedley family  that appeared on my personal blog.