Bankruptcy in England in the early nineteenth century

It seems that my fourth great grandfather, William Pulteney Dana (1776-1861), went bankrupt and was gaoled for it. Notices in the London Gazette include insolvency and I found some concerning William Dana that give some of the story of his financial experience. The Gazette commenced in 1665 and is now digitised and searchable.

(On their own Petitions.)
A few months later he was out of gaol and living in lodgings. We learn that as well as being on half-pay from the army, Dana was running a printing business. 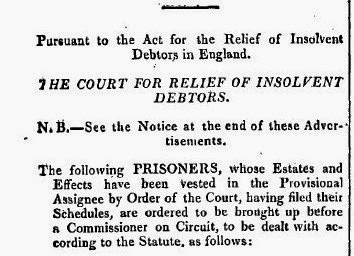 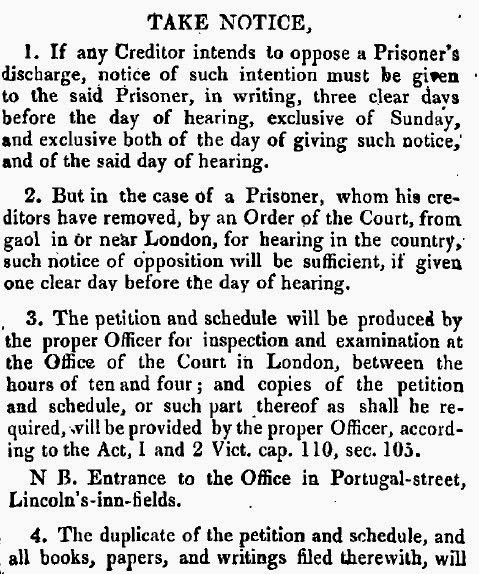 Some months later his case was adjourned. 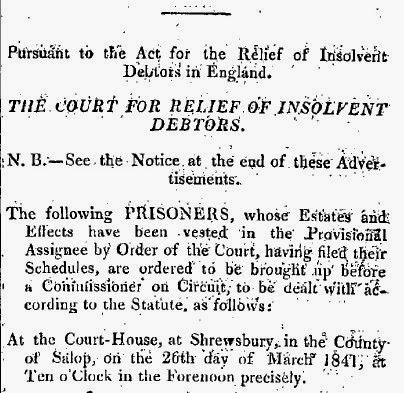 I have found no further mentions of the case. I assume Dana settled his debts. At the time of the 1851 and 1861 censuses he was living with his married daughter and her husband in a terrace house in Shrewsbury. It would seem his finances did not recover.  It was quite different to living in Roughton Hall.

Bankruptcy featured a lot in Victorian literature. Charles Dickens's character of Mr Micawber springs to mind. In 1824 Charles Dickens's father, John Dickens, was imprisoned for debt under the Insolvent Debtors Act of 1813. It wasn't until 1869 that debtors no longer went to prison. For a brief history of insolvency law in England the Wikipedia article at http://en.wikipedia.org/wiki/United_Kingdom_insolvency_law#History is useful. However I found the chapter on the subject of Bankruptcy, Debt and Money lending in What Jane Austen ate and Charles Dickens knew : fascinating facts of daily life in the nineteenth century by Daniel Poole very readable and informative.


Earlier this month, Susan Donaldson wrote about a book on Victorian life and this is another but containing many references to novels of the era. Bankruptcy and debt featured in many novels and this presumably was based on the experiences of living in the era. My forebear was one of those who experienced this misery.