An article in the New Yorker, Scattered Leaves describes how a medieval scholar discovered how a book of hours, a type of personal prayer book, dating from the 1460s with gold illuminations, came to be broken up.  It survived intact until 2010 when it was catalogued as "APPARENTLY COMPLETE" at a Christie's auction.  By late 2013, the book had been dismantled and leaves sold separately, particularly on EBay, to make a bigger profit. The scholar acquired the cover and 7 remaining leaves out of the original 234.  The original number of leaves is known because the book had previously been catalogued and described. 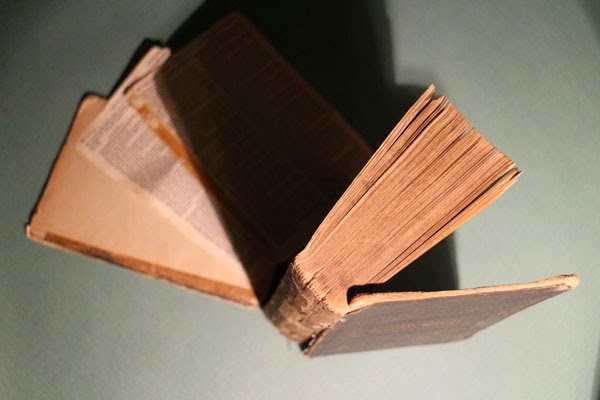 Digitisation, the process of creating digital copies by scanning or photographing original documents, typically results in a collection of digital images.  In a sense, the copying process resembles book breaking, but without destroying the original.  The resulting collection then needs to be organised and presented in a way that faithfully represents the original as far as possible.

Even without deliberate dispersal, as in the case of the book of hours, the original may not be complete at the time of digitisation.  Unless it has been described in sufficient detail to note the missing parts, users may make erroneous conclusions.

Have you tried to scan or photograph your own genealogy artifacts or records in an archive?  It is easy to skip a page, or make duplicates, isn't it?  My luck dictates that the missing page contains the record of my ancestor!

Institutions like archives and libraries do take great care to ensure the quality of digitised copies of documents.  The standards published by the State Library of Queensland are an example. Notable in these standards is the requirement for structural metadata in addition to  descriptive, administrative and technical metadata  (p.4 item 7).  The structural metadata describes the relationships between digital files such as the sequence of pages.

Commercial genealogy vendors do not always take the same care as public institutions.  Although the following examples refer to a particular company, I regularly hear reports of poor curation of digital records by other companies.  In a recently reported scandal, an Ancestry.com employee, contracted to digitise records at St Louis repository of  the USA National Archives and Records Administration, disposed of military draft-cards when under pressure to perform efficiently.  In Ancestry's 1871 census collection for Enumeration District 9,  Hitcham, Suffolk, England, pages 3, 6, 9, 13, 16, and 19 are missing.  The entry for my great grandmother, Susannah Stiff, on page 3, reveals her real relationship to Abraham Stiff (grand-daughter, not daughter).  What did I say about my luck?

So, next time you use digital resources ask yourself: Is the collection complete?

Digital copies enable access that would not otherwise be possible, help researchers find resources and use the materials in new ways.  They are not a complete substitute for originals, and only assist with the preservation of the originals by reducing direct use.  Original materials that are worth photographing or scanning are worth keeping carefully. Once digital copies have been made, their preservation presents its own set of challenges.  Digital files require constant care with regular copying to new media and new formats. The JISC digital media Guide to Digital Preservation notes:


"due to technological obsolescence and media fragility, many consider it possible that future generations will have less information about Gulf War conflicts (recorded on digital media) than the First World War (recorded on analogue media)"


An excellent example of how digitisation enabled scholarly research is The Great Parchment Book project.  This manuscript containing surveys and estate records from Derry, part of the Ulster plantation, was compiled in the 1630s.  It was so badly damaged by fire in 1786 that is has been unreadable until the restoration and digitisation project.  The website presents digital images before and after manipulation, transcriptions and background information.

High quality digitisation combined with careful and accurate presentation is what I want to see from all providers of research materials relevant to genealogy.   That will best support my personal scholarship, and yours.